THIS DO IN REMEMBRANCE 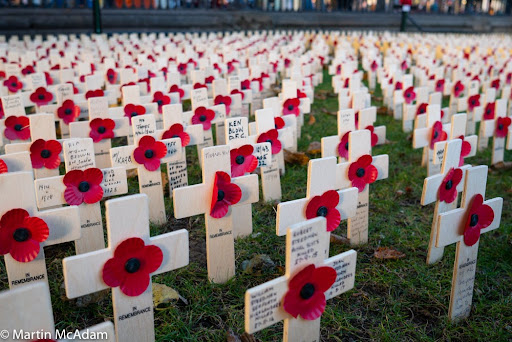 In 1997, I visited several war memorials in Belgium including The Trench of Death (De Dodengang) in Diksmuide. It was surreal to walk in that long, winding trench where so many valiant young men perished fighting for freedom. In Flanders’ fields, blood-red poppies do indeed grow. One of them is pressed in a Bible of mine.

My father was born in Bruges, Belgium during the Second World War. He told us about his parents digging in garbage cans for any kind of redeemable scraps with which to make soup. He told us how his mother, in sheer desperation, banged on the barracks housing German soldiers and laying claim to the fact that she, herself, was German, demanded food for her children. My father recounted his fury when he was tricked by a family friend and left, for his own safety and sustenance, at a distant castle with other children from impoverished families. We also heard how he howled until the nuns gave in and let him sleep with his older sisters. Dad shared how the sound of low-flying planes triggered fear and how days when the wind carried ash and an indescribable stench made him nauseous.

In a 1948 speech to the House of Commons, Winston Churchill said, “Those who fail to learn from history are condemned to repeat it.”

At exactly 11 a.m. on November 11th each year, many Commonwealth and Allied countries pause in somber silence to remember the staggering cost and aftermath of war. In the First World War alone, nearly 61,000 Canadians were killed and another 172,000 were wounded. More than 9000 “shell-shocked” soldiers returned home bearing the invisible and unshakeable trauma of warfare deep in their hearts and minds. The Second World War would claim the lives of a further 45,400 Canadians.

On Remembrance Day, we pause to pay homage to the courage and sacrifice of men and women, many of whom paid the ultimate price, to secure our liberty and peace. We honour them and the precious legacy entrusted to us by cherishing our freedom and resisting anything that would threaten it.

In the Gospels we read that just a few hours before he was betrayed and handed over to be crucified, Jesus “took bread, and when he had given thanks, he broke it and said, “This is my body, which is for you; do this in remembrance of me.” In the same way, after supper he took the cup, saying, “This cup is the new covenant in my blood; do this, whenever you drink it, in remembrance of me.” For whenever you eat this bread and drink this cup, you proclaim the Lord’s death until he comes.

At first glance we might think that Jesus was being a little maudlin, insisting that every time his followers shared a meal together that they relive the gruesome way he would die – beaten and flogged, then crucified on a Roman cross. But what we need to know is than in Judaism, remembrance is more than simply recalling a fact or an event. Remembrance involves having an awareness and understanding of what has occurred in the past and being aware of the implications for the future. Remembrance means being conscious of someone or something and then acting accordingly.

Jesus was not calling us to focus on his death, but rather on what his sacrificial death and subsequent resurrection means for us. Jesus came to destroy the works of the evil one, to set us free from the tyranny of sin and to give us victorious life overflowing with hope, love, peace, and power.

Today, as we gratefully live in the blessings of the great and precious sacrifices made on our behalf, we truly honor those who made them. This we do in remembrance.